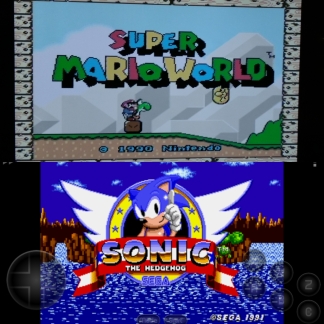 Mario came out in the 80s on the Nintendo Entrainment System (NES) and in the same period Sega had a mascot named Alex Kidd which came out on the Sega Master System. Both were 8 bit consoles, took cartridges and only needed two buttons to play a game. The unique thing that Sega had at that time was that they had games built into the Sega Master System console itself, which I thought was an excellent idea from Sega as I had not seen a console with a built in game.

A fun fact about me is the first game that I owned was Alex Kidd in Miracle World and the first console I owned was a Sega Master System 2, which had Alex Kidd built into the console itself.

In the 80s Super Mario had 3 sequels which were a big hit and from that created a cartoon series. Alex Kidd sequels were not as popular compare to Super Mario. It seemed that Alex Kidd in Miracle World which was the first Alex Kidd game was the most successful. I still play that game till this day.

The Sega Mega Drive was a 16 bit console which stereo sound and ‘blast processing’ as Sega like to call it. The control pad had 3 buttons, which were known as A, B, C and also a start button. When the Sega Mega Drive was released Nintendo still had the NES which only had 8 bits and mono sound. Despite having this people were still buying the NES.

In America Sega released an advert saying ‘Genesis Does what Nintendon’t’ which meant that Sega can do a lot more than the Nintendo.

In 1989 Alex Kidd was released on the Sega Mega Drive but was not a great hit compare to Mario.

The Super Nintendo Entrainment System (SNES) was a 16 bit console with stereo sound. The console came with 6 button control pad which were known as Y, B, X, A, L, R. The control pad also had a start and select button.

The Super Nintendo was the response for the Sega Mega Drive. In the 90s Sega and Nintendo were the two biggest names and rivals in the gaming industry.

Not only did Nintendo come out with the Super Nintendo they also came out with Super Mario World which was one of the launch titles for the console. This was a huge success for Nintendo as it was the first time to see Super Mario on a 16 bit console which meant better sound and graphics. Also in this game new Power-ups were introduced and also Yoshi the dinosaur came on the scene. It had 96 Levels of fun and there were different ways on completing one level.

In 1991 Sega came out with a new mascot known as Sonic the Hedgehog. This was a blue, cool looking hedgehog that was really fast. Sonic also had power ups such as power sneakers which would make him go fast. I use to call them faster boots and when I use to watch my older brother play Sonic I always use to tell him “get the faster boots”. Also Sonic had invincibility which was the stars and also a shield. Sonic was the response to Mario and from this point forward become the biggest rival mascots and also the most talked about topic in the school playgrounds and amongst friends.

Fun fact about me is that the second console that I owned was the Super Nintendo Entrainment System which came with Street Fighter 2 the world warrior.

When I was in school in the playground we use to ask each other two questions.

What do you prefer Sega or Nintendo?

Who do you prefer Sonic or Mario?

This was the most talk about thing in the 90s.

I preferred Nintendo over Sega and Mario over Sonic.

The reason for this is that i thought that Nintendo had a better library of games and found Mario to be more of a challenging game compare to Mario, which made it more fun.

Do you guys agree with me?

What did you prefer?

Let me know your answer on Instagram @ Retro Gamer Strikes Back