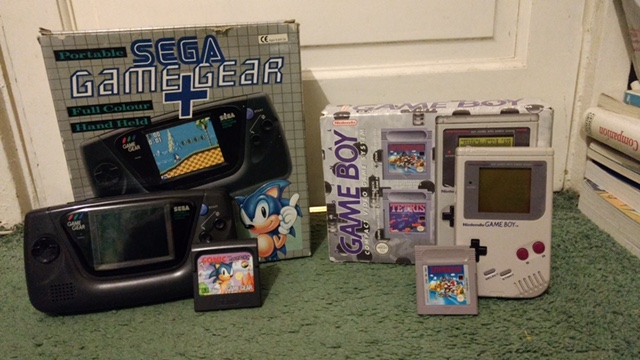 Which console do you have Sega or Nintendo?

What do you prefer Sega or Nintendo?

Who is better, Sonic or Mario?

These were the questions that we asked in the playground at school in the 90s. Sega and Nintendo were the biggest names in the computer gaming industry. I never knew anyone back then owning both Nintendo and Sega consoles. It was either you owned a Sega console or a Nintendo console.

Both companies also came out with handheld consoles. Nintendo came out with the Game Boy in the late 80s. The Game Boy took cartridges for games and needed 4 AA batteries to power the system. The graphics were very simple, had no colour screen, no backlight and also had stereo sound. It had 2 buttons, D pad and also a start and select buttons. The control layout reminded me of the NES control pad.

Despite the Game boy having very simple graphics and no backlight it was a huge hit.

Sega saw that Game Boy was a huge success and came out with a handheld console called the Sega Game Gear, which came out in the early 90s.

To me the Sega Game Gear looked so much better than the Game boy and also the hardware of the Game Gear so much more superior then the Game Boy.

Sega Game Gear had colour screen, better graphics watch TV on the go and also had a rechargeable battery pack. It needed 6 AA batteries to power the system on.

The main reason for this was the games that were available for both systems. The Game Boy had better and more variety of games. The Game Gear was more expensive, the battery life was not long as the Game boy and also with the Game Gear there was a common fault with the screen.

I do have to say that Sega came out with good ideas for their consoles.

Overall both consoles are excellent and recommended them to any retro game collector.